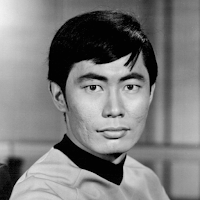 Edmonton Public Library, Edmonton, AB, will allow the sexual assaulter named George Takei of Star Trek fame to "share pearls of wisdom" by speaking at the library despite his being a known sexual harasser:
This open door policy for sex harassers in public libraries makes the job of trying to stop the sexual harassment of librarians so much harder.

Here are the "pearls of wisdom" the library expects from the sexual harasser—a guy who blamed "Russian bots [for] the attacks on his reputation" after joking about the assault with Howard Stern: 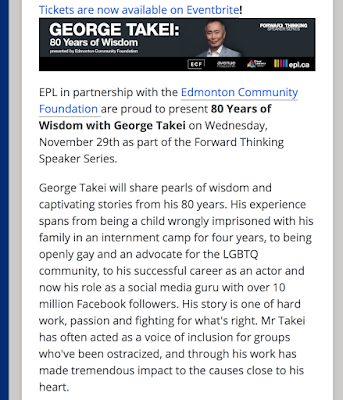 
No, @EPLdotCA should not allow @GeorgeTakei to speak.  His blaming the matter on "Russian bots" combined with the @HowardStern interview is damning.  Libraries have serious sexual harassment issues given all the unfiltered Internet allowed despite the law, common sense, and community standards.  You don't invite in a sexual harasser to speak in a library, and if you already invited him, dump him.

Don't be the library that sends the message that you just don't care about the sexual harassment of librarians or of people generally.  As Mr. Takei says in the context of sexual harassment, "This tells us about the leadership there--whom they value and whom they don't."  Now there's a pearl of wisdom the library should follow.

Another day, another sexual harassment suit against Fox News. This tells us about the leadership there--whom they value and whom they don't.
— George Takei (@GeorgeTakei) April 3, 2017 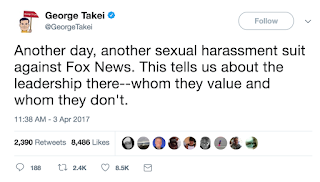 Posted by SafeLibraries® at 3:06 AM