Code of Conduct for NJLA Conference

Code of Conduct for NJLA Conference

The New Jersey Library Association sponsors a variety of forums, meetings and professional development opportunities, including the annual spring Conference.  The purpose of these events is to provide NJ librarians with opportunities to learn, connect and grow, which we believe to have a positive impact on the development and improvement of libraries throughout the state.

NJLA does not tolerate harassment of members, attendees, staff, venue workers, speakers or other participants at any meetings or events sponsored by the organization.  Speakers are asked to frame discussion as openly and inclusively as possible and to be aware of how language or images may be perceived by others.  Participants may - and do - exercise their option to leave a session or a conversation.  As a statewide professional development association for librarians and library workers in New Jersey, the events sponsored by NJLA are an extension of work and no person should work under threat of harassment.

In an effort to create an environment based on mutual respect and free of harassment, some behaviors are specifically prohibited:

All participants and presenters are expected to observe these rules and behaviors at all NJLA meetings or events. Any breach of this code of conduct should be reported immediately to the NJLA Executive Director or Event Organizers, who will determine appropriate action and consequences.

To report a problem or incident to the NJLA Executive Director or Event Organizers during the 2015 NJLA Conference in Long Branch:

To Call a Taxi:

Copyright 2015 New Jersey Library Association.
Republished on Librarians.cc for the information of readers with links to original sources.

Original source and source of graphic and map:

Posted by SafeLibraries® at 9:59 PM No comments:

Another Librarian Speaks Out About Being Sexually Harassed

Another librarian speaks out about being sexually harassed (and the recent Team Harpy debacle), namely, well-liked, well-respected Meredith Farkas:


I’m disturbed by the fact that, after all of the petitions, and Facebook drama, and blog posts, and tweets about this no one seems to be talking about this (other than right-wing feminist-hating nut-jobs) since the lawsuit was settled and Lisa and nina published retractions.

Still the greatest tragedy here, in my opinion is that so many women suffer sexual harassment and most of the time the perpetrators get away with it.  And this whole sordid affair [#TeamHarpy] did little to help the cause of encouraging women to come forward.  I’ve been sexually harassed and stalked and never reported any of it.  But it was when a faculty member at a former job who used to stand too close to me and would put his arm around my waist sometimes later escalated to grabbing a colleagues breasts that I realized my silence was hurting other women.  Because men who do things like this don’t just do it once.  If they get away with something that you consider too minor to report, they may escalate to doing something much worse to someone else.  We have to find more ways to help women feel safe reporting harassment.  I’m happy that more conferences now have codes of conduct and discernible methods of reporting inappropriate behavior, and that will help, but it’s not enough.

Note Team Harpy member/treasurer Sarah Houghton has not yet retracted anything—likely since she is ALA's public library Internet filtering expert and doesn't want to be connected further to one of the biggest hoaxes in American librarianship history. 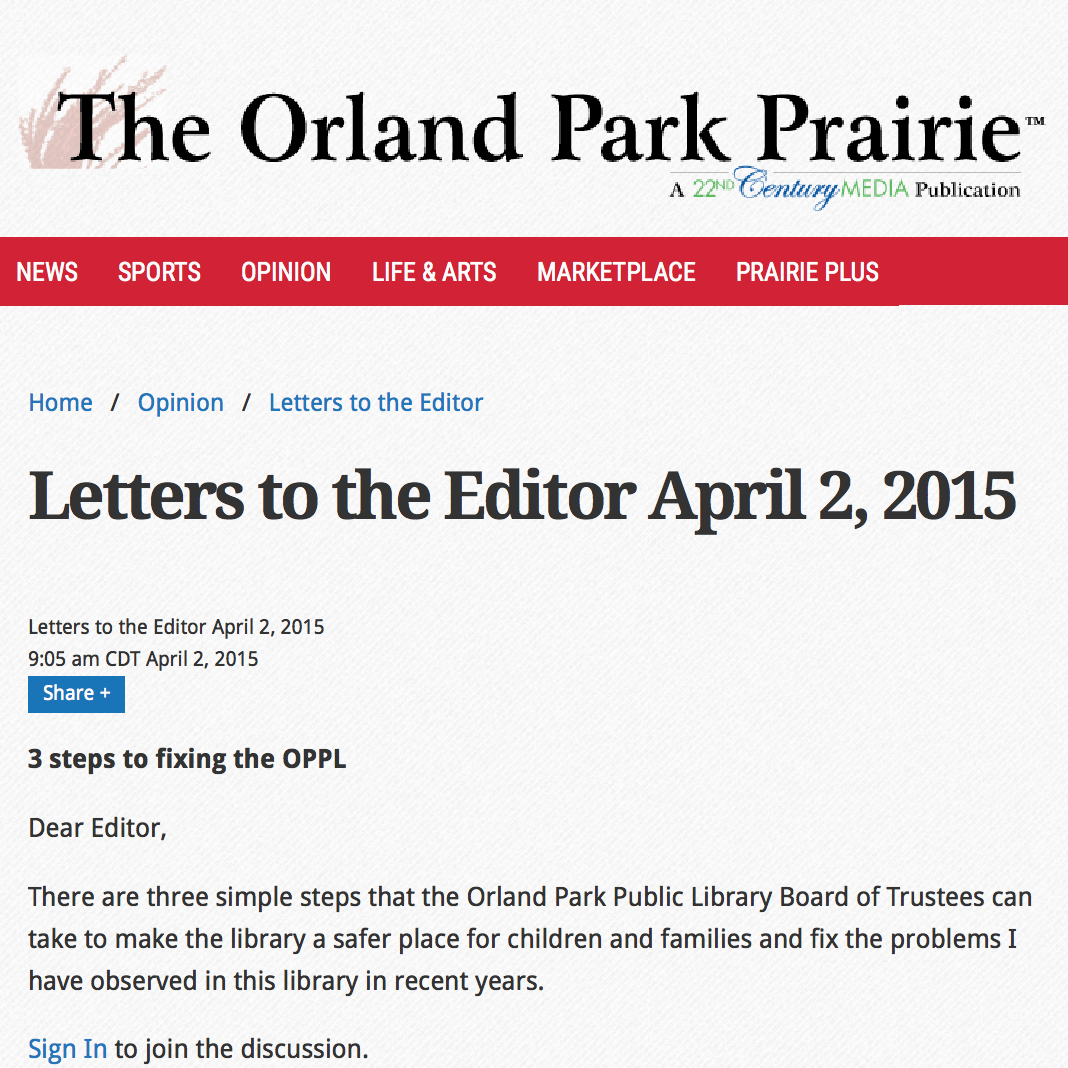 Here's a published letter to the editor supporting sexually harassed librarians, "Neither patrons nor library employees should be forced to suffer with sexual activity of any kind in the OPPL," and urging new library trustees to take action to protect them from further harassment:

3 Steps to Fixing the OPPL

There are three simple steps that the Orland Park Public Library Board of Trustees can take to make the library a safer place for children and families and fix the problems I have observed in this library in recent years.

First, the OPPL needs to install filters on its adult computers to block child pornography and other illegal content from being accessed and to prevent men from arousing themselves sexually in the adult computer area.  Neither patrons nor library employees should be forced to suffer with sexual activity of any kind in the OPPL.

Libraries such as those in Niles and Lemont have successfully eliminated this problem by blocking such sites on public computers.

A library is a taxpayer-funded facility for education and learning, and not a place for sexual activity of any kind.

Second, the OPPL should turn back to its mission statement and eliminate its outrageous food and jewelry purchases for staff.  Nowhere in the library's charter or mission statement does it state that the OPPL should be using taxpayer money to buy expensive treats or gifts for employees.  Yet, the OPPL maintains active purchasing accounts at the Orland Park Bakery and Noral Diamond Jewelers that provide no public benefit and should be immediately closed.  It is inexcusable to squander public money on expensive pastries and jewelry store purchases for highly-paid OPPL staffers who can afford to buy their own paczki and crystal bookends.

I have a problem with that and believe management and other personnel changes are needed to remedy ongoing safety and spending problems in the OPPL.  I urge the two new incoming trustees to take the three steps outlined above as soon as possible.