Help With a Subtle Pervert Patron 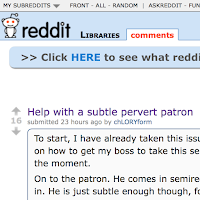 Please help this librarian dealing with sexual harassment in a public library:

On to the patron. He comes in semiregularly. He likes to flirt with the women in circulation, the department I work in. He is just subtle enough though, for us to be unable to really do anything about. For example, we wear lanyards that have our name tag on them, along with buttons that the library provides. He will ask us about the buttons or our names, but he's actually just checking out our chests. He has followed women around while they're shelving to the point that others have stepped in and told him to leave us alone. The answer to that was an email saying if we were uncomfortable, we were encouraged to go somewhere else or do something else to get out of the situation. But this dude stares and makes comments that are just too little to do anything about, such as asking the younger women if they are married yet. I need advice for 1) telling him professionally that I know what he's up to and that it is not appreciated and 2) getting over the feeling that I need to scour my skin with steel wool after. I've dealt with plenty of perverts prior, but none have given me this uncomfortable feeling like he can, and they've been blatant enough for us to do something about it

Thanks for reading and for any advice!

I responded as follows (hyperlinks added):


Creepy. I'm only a volunteer librarian and I would not know how to address this situation. So the following are wild guesses.

I would consider checking sexual harassment databases and the like to see if he is present.

I would also consider asking my boss to request the assistance of police in how to address this kind of situation; police must have experience in this.

If management says, as some libraries do, "if you don't like it, don't let the door hit you on the way out," then I'd go directly to the police to ask for assistance, and I would file an EEOC complaint against the library -- perhaps make a recording of your conversation with management if/when they tell you to get lost. You do not need to be pressured into working in a sexually harassing environment because management refuses to take action to stop the sexual harassment, and if you quit as a result of management's refusal to address the sexual harassment, that might be considered "constructive discharge" entitling you to a pile of benefits while potentially forcing positive change at the library that protects the remaining library employees. Be prepared mentally that ALA will provide you no assistance whatsoever as it has stated librarians are never sexually harassed, likely never will be, and any past filings by librarians with the EEOC or legal cases were really over nothing.

It is noteworthy that even as a librarian reaches out for help with sexual harassment and I and many others provide substantive answers/suggestions, trolls who support the American Library Association's pooh poohing of sexually harassed librarians ignore the serious issue and continue the personal attacks instead, but I won't quote them here; they basically found my saying I am a volunteer librarian as the excuse to ridicule me.

Please respond to the beleaguered librarian on Reddit, not in the comments below.


URL of this page:
librarians.cc/2016/07/help-with-subtle-pervert-patron.html

Posted by SafeLibraries® at 2:48 PM