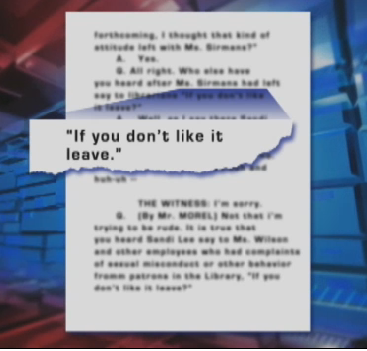 Librarians who quit may not even realize they've been essentially fired.  Constructive discharge (a kind of wrongful termination) makes libraries and municipalities (that take no action to stop libraries from acting outside the law) subject to liability.


I also finally speak out because after conversations that I had while I was employed at the OPPL with my director and assistant director, I was told that I could quit if I did not like their policy, with no hard feelings.  ....  I ... was being told I could like it or lump it.  ....  I was told by Director Weimar that porn was protected under freedom of speech.  ....  I was basically told ... to leave it alone.  I took her stern warnings as, "You cause trouble, you lose your job," which I really did not want to do because I really enjoyed being part of the library family.  I just did not like the pervs [air quotes] that came in and made me feel uncomfortable.  However, my husband did want me to quit.  So eventually, after enough complaining, I did so.

Birmingham Public Library librarian Barbara Ann Wilson was told, "If you don't like it leave" (link).  The graphic at top right illustrates this statement.


24.  In 1997, Lawson was advised by Plaintiff Nancy Corcoran that staff members were being regularly exposed to obscene and sexually explicit materials at their work place and throughout MPL.  Lawson responded by memo rejecting any responsibility on the part of the library to monitor or restrict access on the Internet.  Lawson went further to formulate and implement a policy under which MPL would allow complete and unfettered access to the Internet by any patron.  Lawson and MPL took the position that the only relevant concern was the First Amendment rights of the viewers of obscene and pornographic materials, and that it would not be permissible for MPL employees to take any action that would interfere with patron access to these materials.

There are other cases, I just think three examples is enough.

It's the right thing to do, the latest case being from just yesterday:


URL of this page:
librarians.cc/2015/01/constructive-discharge-of-librarians.html

Posted by SafeLibraries® at 9:26 PM